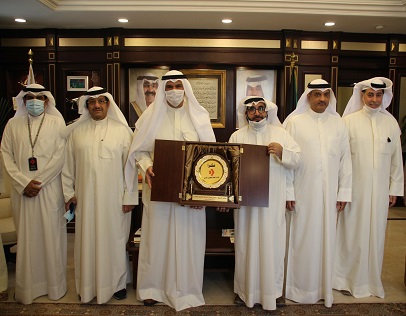 In the beginning, the Director General of Civil Aviation Eng./ Yousef Al-Fauzan expressed for himself and on behalf of all Civil Aviation staff, earnest thanks to Sheikh/ Salman Al-Sabah for his great efforts during his term in office over 4-year period, which resulted in realizing many achievements and development projects, indicating that these efforts contributed to raising performance efficiency in the operational sectors of the Civil Aviation and provided the management of Kuwait International Airport’s buildings with clear vision and specific objectives, and also made a qualitative leap in the air-transport sector in the State of Kuwait.

Eng./ Al-Fauzan referred to the role of Sheikh/ Salman Al-Sabah in establishing the core elements for the growth and development of this sector, providing the adequate ambient in light of the domestic and international changes, and stressing on applying the international quality standards in all the vital sectors at Kuwait International Airport.

On his part, Sheikh/ Salman Al-Sabah expressed his happiness for this honor, and praised the role assumed by the judicious political leadership to develop the Civil Aviation sector through continuous support, care and trust, which constitutes an incentive to achieve best results, wishing for all leaders and staff of the Directorate to proceed further in achieving success so as to serve the country on all levels.