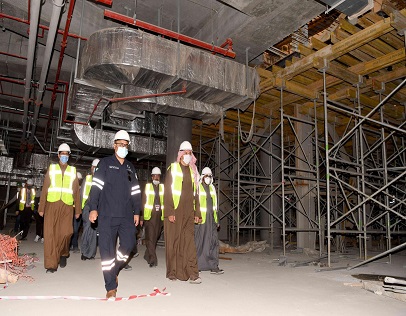 H.E. President of Directorate General of Civil Aviation Sheikh/ Salman Sabah Al-Salem Al-Homoud Al-Sabah, made an inspection visit today, Thursday, to the new passengers’ terminal (T2) at Kuwait International Airport as part of the follow-up to the project's work progress.

The (Civil Aviation) explained in a press release that the President of the Directorate, accompanied by the Undersecretary of Ministry of Public Works - Mr./ Ismail Al-Failkawi, and the Director-General of Civil Aviation - Eng./ Yousef Al-Fauzan, has listened to a detailed explanation from the project manager - Eng./ Faisal Al-Ustath, which included the phases of the project’s work progress and the rate of completion therein, which reached 41 percent.

The Directorate also said that the latest developments in the terminal were reviewed during the tour visit, pointing out that it is considered one of the most important strategic projects for the development plan (New Kuwait 2035).