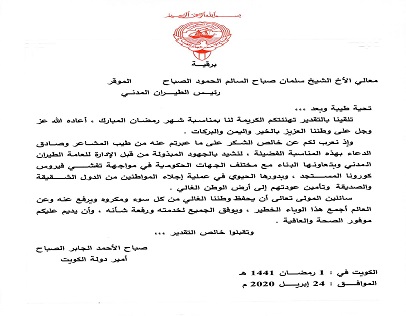 HH the Amir May God protect him telegram DGCA

HH the Amir, May God protect him, praises the efforts of civil aviation during the plan to evacuate citizens

His Highness, the Emir of the State of Kuwait, Sheikh / Sabah Al-Ahmad Al-Jaber Al-Sabah - may God protect and preserve him - sent a telegram to the President of Civil Aviation Sheikh / Salman Sabah Al-Salem Al-Hamoud Al-Sabah, in which His Highness praised the efforts made by the General Administration of Civil Aviation and its constructive cooperation with various government agencies in the face of an outbreak Corona virus emerging and its vital role in the process of evacuating citizens from brotherly and friendly countries and ensuring their safe return to the their homeland.