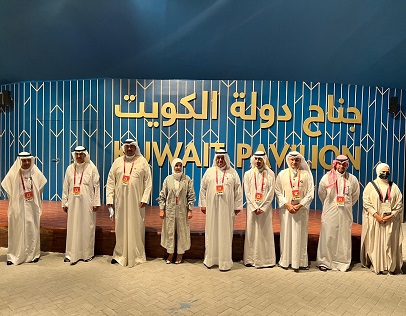 Kuwait's Directorate General of Civil Aviation has eminently displayed current and future projects of Kuwait International Airport at 17th edition of Dubai Airshow (2021) that kicked off on Sunday.

President of the directorate, Sheikh Abdullah Al-Ali Al-Salem Al-Sabah, accompanied by Saad Al-Otaibi, the deputy director general for planning and projects affairs, visited on Monday the Kuwaiti pavilion where they were greeted by Information Undersecretary Munira Al-Huwaidi and the director of the Kuwaiti section, Dr. Badr Al-Enezi.

Al-Otaibi said in remarks to KUNA that the Kuwaiti participation in the fair is aimed at displaying key development ventures particularly for overhauling the infrastructure and the air aviation.

One of the projects underway is terminal-2, forecast to accommodate 25 million passengers a year, he said, adding that another one is the third runway being built to cope with mounting air operations, in addition to the construction of a new observation towers, to be equipped with state-art devices.

Moreover, there are other suggested projects to upgrade ground services, security services, fueling and maintenance.